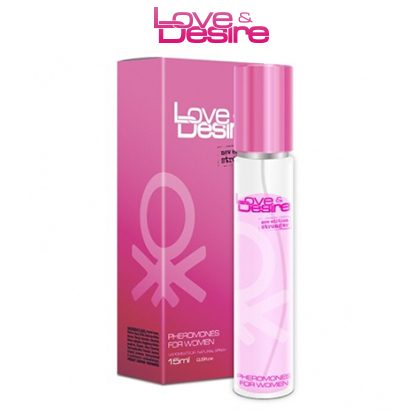 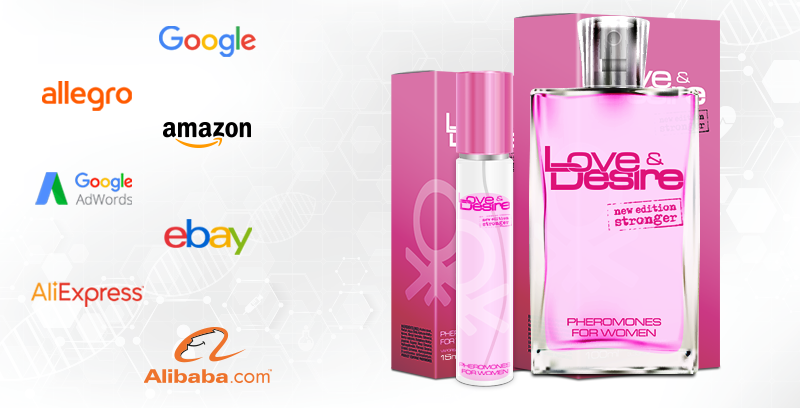 Love & Desire ™ gaining huge popularity among customers of sales platforms and e-shops was also noticed by the lifestyle press: 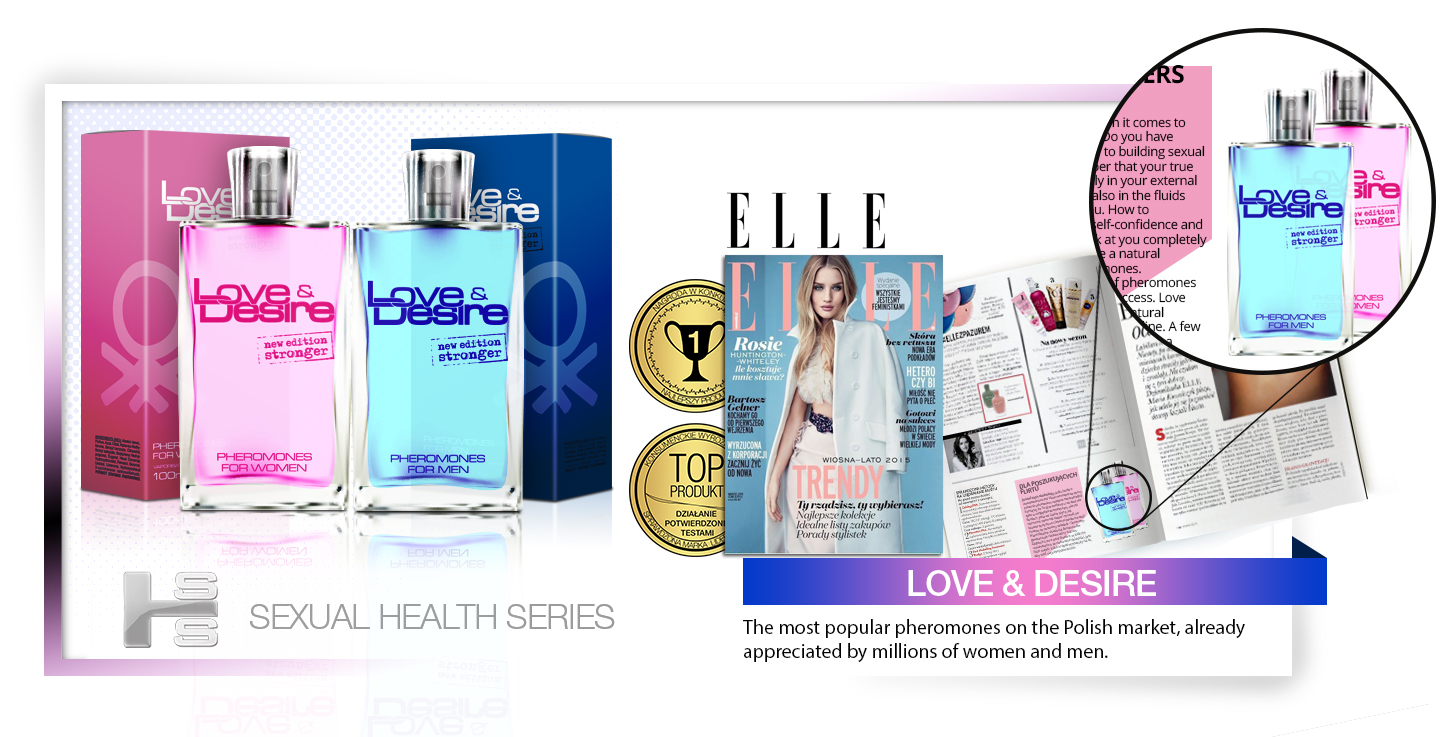 Products from the Love & Desire series ™ : 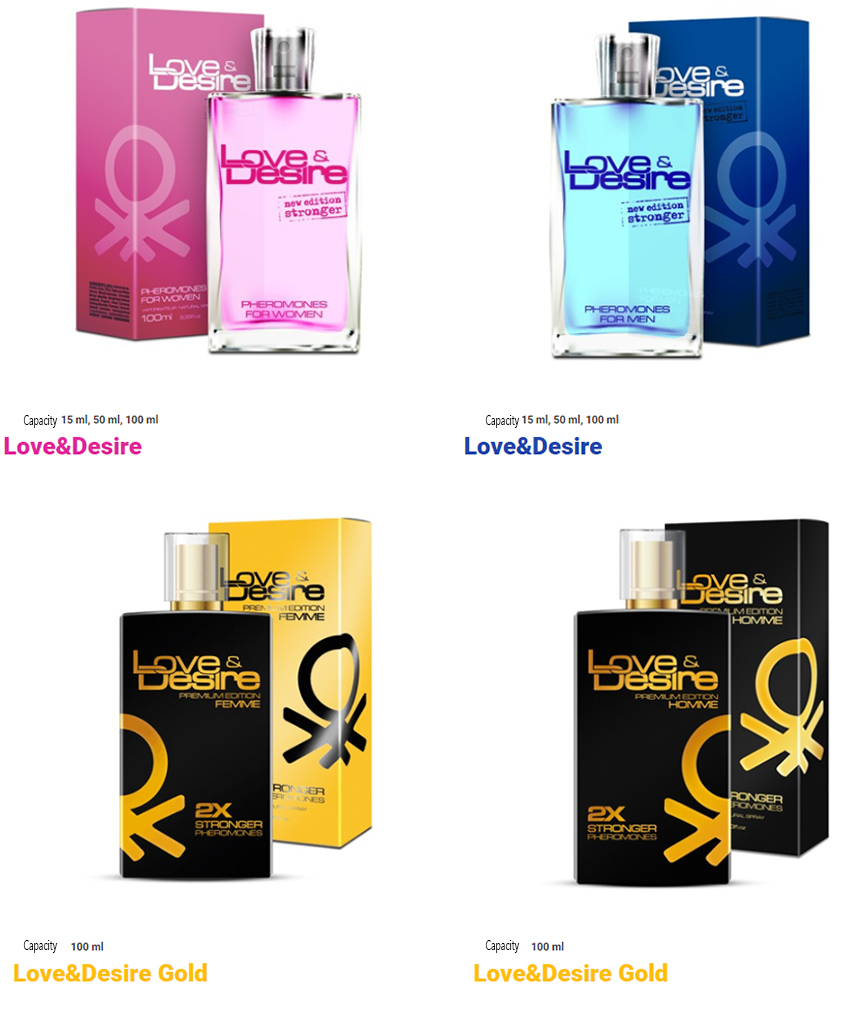 There is no such formula on the market. Only our Love & Desire pheromones have a four-component, unique combination of ingredients.

This is a sexy, fruity and floral fragrance for resolute, independent women who know what they want and don't hesitate to reach for it. It is a very feminine fragrance: sensual, sophisticated, strong, hot and defiant. It provokes and fascinates, causes a lot of confusion in the minds of men, does a lot, except one - it does not induce indifference. The Love & Desire ™ fragrance consists of the following scent notes: blackcurrant, pear, Italian clementine, orange, ginger flower, hibiscus seeds, freesia, Californian tree Cedar and Vanilla. 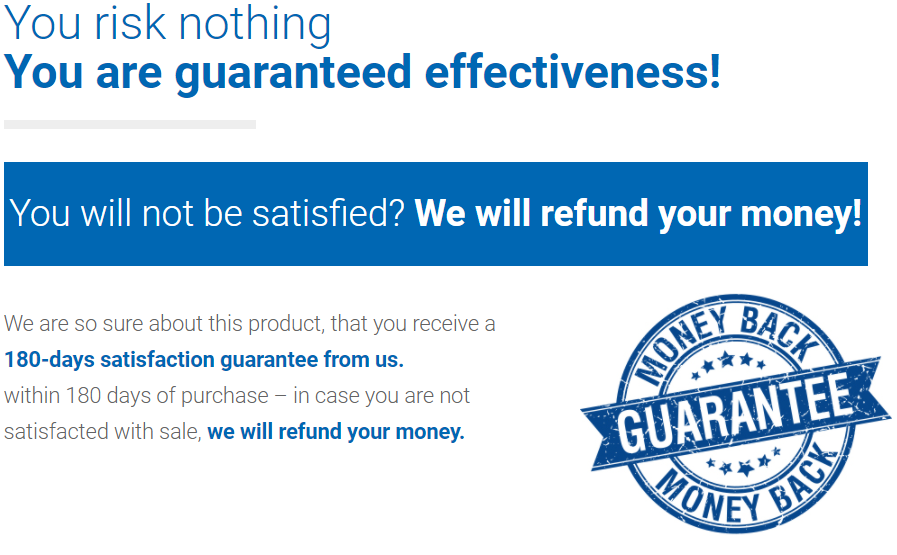 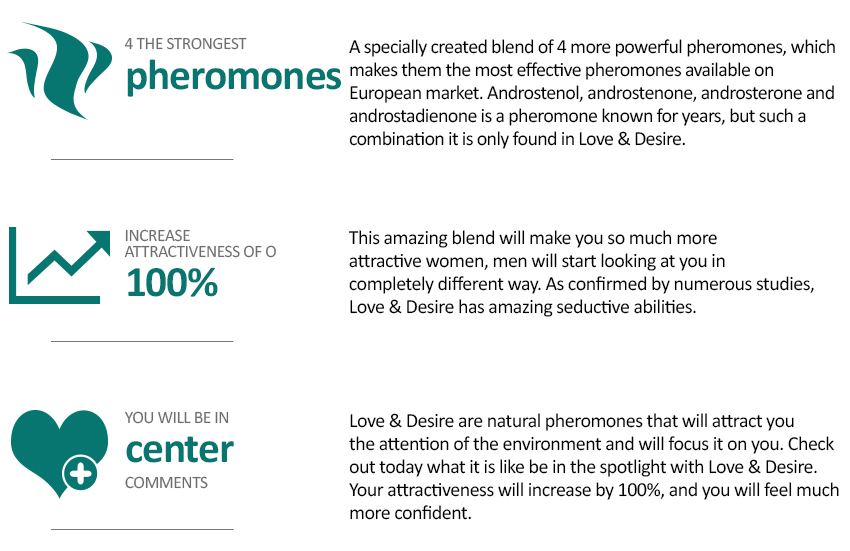 Each of us sometimes lacks courage in male-female relationships. It happens that we feel too little attractive which in turn blocks us and we are reluctant to start a conversation with the person we are interested in. Stop the stress of meeting new people, use the power of pheromones!

How do pheromones work and what is their scientific background?

Our attractiveness is influenced not only by our appearance, but also by "this something", our inner magnetism .. If you would like to freely make new friends and still remain yourself, feel free to in natural, proven ways - rely on pheromones. Check how many people appreciated the effect of pheromones on their contacts with other people!

Of course, pheromones change not you, but the people you are with. Pheromones send them an invisible signal emphasizing your strength and magnetism.  Thanks to pheromones, you can easily ask the man you are interested in for a phone number, invite on a date or seduce. And you can be sure that no one will refuse you!

Love & Desire - the most popular on the market!

Pheromones Love & Desire are very popular both among customers and renowned pickup coaches! They have gained popularity. thanks to incredible efficiency. Pheromones have been designed in such a way that they can be used like ordinary perfumes. In addition to the pheromones in the composition, they also have a fragrance!

How do Love & Desire pheromones work?

Pheromones work naturally, invisibly. The Love & Desire fragrance itself is very feminine, strong and hypnotic and at the same time delicate. Pheromones do not have a smell, they are not perceptible to you, nor for third parties. By using perfume with pheromones, you don't need to use other fragrances anymore. Love & Desire pheromones are for you if:

Love & Desire pheromones will help you:

Under the influence of pheromones it is not you that change, but the people you are with. Pheromones send them an invisible signal emphasizing your independence and femininity.  Thanks to the pheromones contained in the Love & Desire fragrance, you will easily become the object of men's desire.

And you can be sure none can resist you!

Why is Love & Desire the best pheromones for women?

Love & Desire are the most effective pheromones . This is confirmed by the opinions of our clients. In addition, these pheromones were recognized as the best product in the "most appealing fragrance" category.

The effectiveness of Love & Desire is based on years of work and experience on the composition of the pheromone blend. This amazing recipe influences the subconscious, mind and mood creating an atmosphere conducive to establishing close relationships. Each of you who try this fragrance at least once, she will immediately feel like she becomes an object of desire. The pheromones work immediately after application. You will be surprised by the results. So let yourself be surprised and change your life.

Most of the pheromones available for sale are based on chemicalsh: androstenol and androstenone. Love & Desire pheromones are the only ones with two more important ingredients: copulins and estratetraenol. This formula was created especially for this purpose to provide you maximum effects. You will not find such a formula on the market. Only our Love & Desire pheromones have a four-component, unique combination of ingredients.

How does Love & Desire smell for women?

It is an extremely feminine and gentle and at the same time energizing fresh fragrance, filled with life and freedom. People who wear this fragrance feel unique and unfettered. Men define this fragrance as: intriguing, alluring, feminine. It consists of fragrance notes: grapefruit, birch leaf, cypress, sage, vetiver, patchouli.